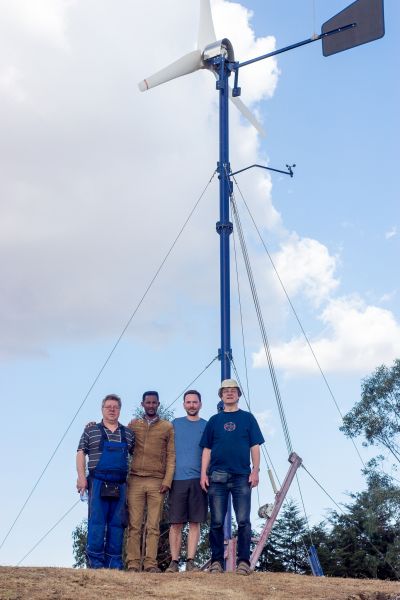 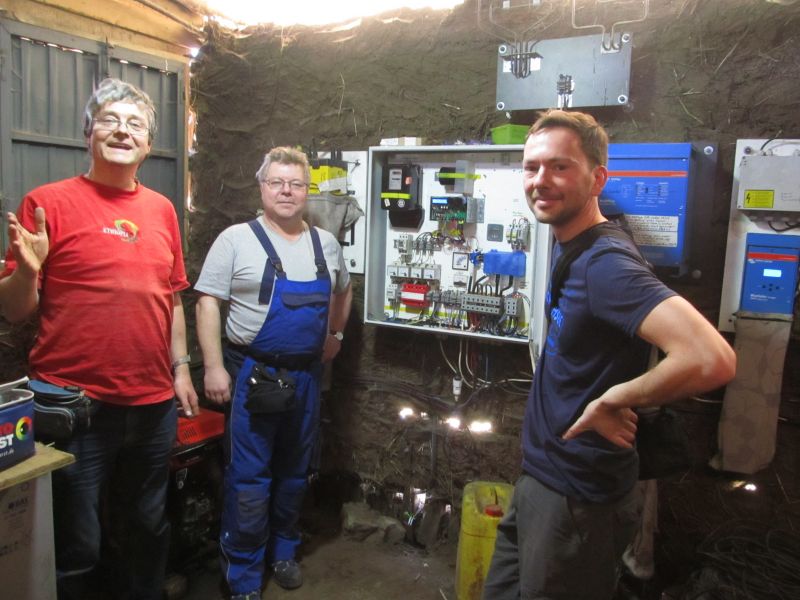 In January / February 2016, the village network was extended to another part of the village. So, by the time we left Tula, at the beginning of February 2016, approximately 85 residential cottages, two churches, the village administration and school were joined onto the network. The energy balance (supply and demand) was at its limit (see: measuring results and calculations in project report 2016). As well as that another unsolved problem came to light: A part of the village approximately 500 m away, was still not connected. This was originally a goal for 2017, as well as the expansion of the solar unit.

In the summer 2016, the message reached us in Germany that a bolt of lightning had hit the installation and the power inverter was no longer producing electricity. The news was contradictory and didn't allow any concrete damage description.

To get a correct analysis of the damage in Tula and if possible to make necessary repairs, Christian Preuß from Rüsseina and Jochen Hahn, travelled to Ethiopia, in October 2016. Due to escalating political tensions it was not possible to travel out of Addis Abeba. The trip therefore had to be fruitlessly cut short.

Because of the unclear image we were able to make of the damage, it was decided during our organisations' general meeting in the autumn 2016 that the large scale plans for expansion in January 2017 should be cancelled. Instead, a small group should analyse the damage systematically and perform necessary repairs. Additionally, we were able to supervise the building of a new hut with corrugated iron roof upon which the new solar unit can later be installed.

Since we knew, that the main power inverter, (24 VDC on 230 VAC) had reported a fault and it was to be suspected that also the electronic step-down inverter, (three-phase current from wind-energy on 24 VDC battery) would have been damaged too, we took both these as well as a cheap substitute power inverter in our luggage. This decision was a well-made one. Exactly these components were what were needed. After a trouble-free entry, we could get started with the work immediately.

The trip with the pre-booked jeep in the district city Hossaena worked out more difficult, than intended. The roads which had been asphalted by the Chinese companies approximately 5 years ago were now already in a state of disintegration again. An asphalt blanket of maximum 3 cm thick cannot hold for long. So, short-term savings prove to be an expensive variation. 5 hours driving time for 230 km means one hour longer than we needed one year ago. In Hossaena, in the evening we could welcome our translator Liranso Salomon, whose knowledge of the regional language Hadyja, makes communication in the village at all possible.

Because of the small size of the group and the short length of time at our disposal, we didn't pitch any tents in Tula but slept in the Lemma-Hotel in Hossaena instead.

On Monday, 23rd Jan. we arrived in Tula. The three young technicians were present. They explained to us that before summer they had connected approximately 30 further residential cottages and the present total of houses now connected is with 112. Not including churches, the village administration and school.  In actual fact this meant an immense excessive demand on the present standing installation. Presumably, the villagers had "strongly encouraged" the technicians to develop the network further contrary to our instruction.

It was good to know at the start that the solar installation proved to be intact together with charger regulators and therefore the accumulators were consequently loaded daily. Our worry was that the condition of the accumulators would suffer because of standing around with low power level for half a year.

As for the wind turbine installation, it was in complete working order. The lightning obviously had not hit the turbine directly but had gone down in the village somewhere. Since there is no obvious sign of damage in the cable, it is to be suspected that the voltage overload came through an indirect lightning impact. Unfortunately, in 2015 we had only installed a lightning protection on the turbine end. In the next project 2018, a lightning protection valve will also then have to be installed at the village end.

The main power inverter, 24 VDC on 230 VAC, 5 KILOWATTS, showed a fault message and despite changing an internal component, it could not be repaired. So, the substitute power inverter (3 KILOWATT) which we had bought with us was installed and now supplies electricity to the village again. Since such a power inverter is made up of individual modules, it will be very likely that in 2018 the relevant components can then be exchanged and the original power inverter can be bought back into operation again.

Due to a surge of high voltage in the switch box, the wind regulator counter and the village unit counter were defect, which however, the technicians (with help?) had already expertly exchanged with existing spare parts available.
The electronic Wind transformers (two electronic welding inverters) were defect as expected and could be exchanged for new ones. As well as that we could repair two existing defect appliances. Now there are two replacement appliances available.
After switching off all the branch lines, we could also then test the isolation values of the main line. This proved to be intact.

The over-all damage picture was admittedly clearer, but altogether still limited.  It could have been much worse with a direct hit.

After we had organised nails and corrugated sheets down in Hossaena, on the 25th Jan. many workers were standing ready and willing to build the new "solar house". A drawing was quickly done and the house corners defined. The building was standing with corrugated roof (the walls had yet to be filled with clay) within 5 hours! That was a master performance, the eucalyptus trunks all had to be cut and split with a hatchet and crowbar, So in 2018, we can then equip the roof with a 3 kilowatt solar system.

5. 4. Disappointed expectations and much understanding

Through overhearing additional remarks of the technicians, we understood that they and the village people expected a large-scale action. In a village meeting, I had to explain that due to the fruitless trip that we had made in October 2016 it was not possible. The villagers accepted this with great understanding. Had they maybe already heard about the trip we had to abandon in Octobers 2016.

On 26th January, one by one we could switch on the electricity for the individual residential homes, which caused a very audible tone of joy. After four days of work we could leave Tula enlightened.

The reason that there had been no reaction from either the headquarters in Addis or from headquarters in Hossaena, in the run up to this trip, lay in the fact that both leading co-workers were no longer in their positions. So we were very pleased when the new project leader introduced himself to us in Hossaena, with whom we could clarify all important questions, (particularly about the possibility of Duty free import). Ashenafi gives a very much committed impression, which makes us very hopeful. (See picture left.)

7. Gifts for the children

After a collection was made in the kindergarten where Mariann, the daughter of Hans-Jürgen Graf one of the Ethiopia-trip team, works, we could give the children of Tula small cuddly toys as well as children's clothing, notebooks and pens. Bringing gifts admittedly is not an unproblematic venture, since it can lead to injustices with the distribution. The joy of the children was gigantic anyway. Also, a football from H. Vater, brought the children together for wonderful team game.

8. A short excursion: Food Security Project in the Lemo-District

On the way home towards Addis, Ashenafi had offered us the opportunity to visit an agricultural project involved with food protection. 15 Km drive out of Addis "Brot für die Welt" (bread for the World) has a small factory farm with the goal of testing earth preservation measures to create free-range conditions and plant new plants, that even with the problems of global warming will open up possibilities of new food sources which can grow in the area despite draught. For instance the Taro-Plant which grows with fat juicy roots in the ground is very tasty and nourishing. The farmers of the surrounding region are to be educated here. Since the support for "Brot für die Welt" (Bread for the world) runs out in 2018, this project is looking for a partner in Germany.

The project trip in 2017 cost approximately 2.300 Euro.  This included purchasing a power inverter, 2 electronic transformers / welding inverter in advance and transport and accommodation costs in Ethiopia. The flight costs and the extras were paid for by the participants privately.

What next with the project?

Because the maximum capacity has already been reached, in 2018 the plan is to double the area of solar panels and to get the power inverter up and working again. This will make it possible to extend the network further and to include a part of the village that has not been taken into account yet and will provide the guarantee of an excess energy balance through the excess production of electricity. It is not technically feasible to connect more solar panels to the existing accumulator block (24 V DC, 1800 Ah), (Maximum electricity overload, and restricted capacity). The rough estimate required for the next action in January 2018 is approximately 10.000 Euro. We hope for further donations and thank all those very much who have made this work possible with their donations.